Dr Tom Balchin and the ARNI Approach to Rehabilitation from Neurological Injury was considered by the judges to have shown the best example of innovation by a voluntary sector provider or registered charity in the field of ABI.
The United Kingdom Acquired Brain Injury Forum First Awards for Innovation in Acquired Brain Injury were announced at the annual conference on Thursday 11th November 2010.

The aim of the awards is to acknowledge the good work which is being done in the sector and reward those who excel in their practice. UKABIF recognises that there are many people who go the extra mile or come up with a clever idea which goes unrecognised. 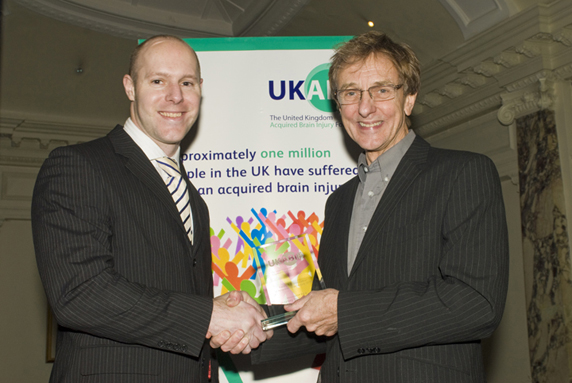 Eminent Neuroscientist, Professor Colin Blakemore, Professor of Neuroscience at the University of Oxford, Fellow of Magdalen College and former President of the British Neuroscience Association, announced the winners of 5 categories.

Dr Tom Balchin and the ARNI Approach to Rehabilitation from Neurological Injury was considered by the judges to have shown the best example of innovation by a voluntary sector provider or registered charity in the field of ABI.

Professor Mike Barnes, UKABIF Chair, Professor of Neurological Rehabilitation at University of Newcastle upon Tyne and former President of the World Federation of Neurorehabilitation stated: ‘…we received a huge number of nominations and hope to publicise the work which is being done to facilitate sharing of good practice and raise the profile of acquired brain injury and its repercussions’.

The ARNI Trust is a registered charity formed in response to the very real demand from stroke and ABI survivors, who uniformly state that they are ‘stuck in limbo’ after coming home from hospital and finishing with neurophysiotherapy. The training it offers is aligned to neurological literature which explains that survivors also need functional task-related practice and resistance training to encourage physical adaption, and to develop coping strategies.

Attend has supported ARNI for four years and ARNI is involved with the new Attend ABI Vocation Programme which assists clients to recognise and enhance the skills and abilities they still possess. Because ARNI strategies are being shown time and time again to have such clearly beneficial results with stroke and ABI survivors around the UK in terms of tackling action control, strength and confidence issues, NHS Stroke Network representatives, clinicians hospital directors and therapists working in the areas of neurorehabilitation are actively encouraging its efforts.

During its decade of operation it shows that over 3,000 people who have had brain injuries of some varying degree have been trained by their instructors. Dr. Tom Balchin created an approach to ‘re-training’ after injury which welds established physiotherapy strategies together with new strategies that he and colleagues have innovated over 13 years to regain isolated movement and management of residual limitations for himself and to tackle the functional limitations of others.

His practice of high-level martial arts and knowledge of strength athletics played a great part in the development of the approach which contains an abundance of techniques which are designed to prime the body for task-related practice and drive plastic changes. The clinical effectiveness and cost effectiveness of ARNI was the focus of an application for a national multi-centre RCT (£1.79 million) by The Peninsula Collaboration for Leadership in Applied Health Research and Care (PenCLAHRC) in June 2010. Although not successful at getting funded, the research team (with support from the South West Stroke Research Network) have a clinical trial development research programme planned for 2011. Other research currently underway includes a 48-week feasibility study by Brunel University using four groups of stroke survivors (n=36), referred to the ARNI training programme by Hillingdon Hospital, West London.

Dr Balchin has a book series in publication which makes the approach fully available. The first of these, entitled: The Successful Stroke Survivor’: the New Guide to Functional Recovery from Stroke’ is 490 pages: part manual and part guide. Each strategy is illustrated with five or six sequenced illustrations so that stroke survivors cannot get confused. This volume has gone through a full year of physiotherapy due diligence and meets best practice guidelines approval. It will shortly be available on the shelves. Find out more about the ARNI Trust at: www.arni.uk.com