The stroke rehabilitation literature suggests that the first three to six months are typically when most spontaneous functional motor recovery will occur. This first recovery mechanism is essentially a resolution of harmful local factors, which generally account for early spontaneous improvement after stroke. These processes include resolution of local edema, resorption of local toxins, improvement of local circulation, and recovery of partially damaged ischemic neurons.

After this time, please don’t let ANYONE tell you ‘that’s it’, because you then have the potential to restore significant function at whatever point from injury you happen to be, whether it is a month or 10 years.  You can take advantage of the second major recovery mechanism: neuroplasticity, which can take place early or late. This is the ability of the nervous system to modify its structural and functional organisation. The two most plausible forms of plasticity are collateral sprouting of new synaptic connections and the unmasking of neural pathways and synapses that are not normally used, but that can be called upon when the dominant system fails.

CIMT (constraint-induced movement therapy – check it out if you don’t know) is a magnificent example of intensive, ultra-focused repetitive work to drive plasticity. This simple but powerful ‘forced-use paradigm’ can be modified for use in your home rather than a clinic, This is the topic for one of my next posts.

So, mu advice is that it is useful to wave goodbye to the naysayers. Forget about any 1-year rule. Forget a 3-year rule. In fact, time to forget ‘the rules’, ok? Very limiting things, rules… because we tend to follow them blindly without asking why they are there or who made them up. Recovery can continue over a long period of time if you have partial return of voluntary movement, especially in the upper limb.  A systematic review of 58 studies confirms the most important predictive factor for upper limb recovery following stroke is the initial severity of motor impairment or function.

Furthermore, who says that you cannot be the exception to the ‘rule’? Potential is a difficult word. I personally have the potential to be astronaut. Probably won’t happen! But recovery potential? Don’t let anyone tell you that you aren’t going to make as good a recovery as possible. The reason is that there is ALWAYS something you can do to try to improve your lot. If all else fails, you’ll at least be keeping the ‘plastic template’ open and available for applications of current or future cutting-edge innovations. That’s why every repetition you do counts. More on this in a later post. For now, I can tell you for certain that time-rules and the ‘nay-sayers’ can be ignored. 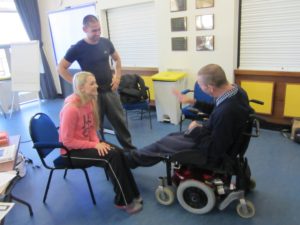 Wider afield, in Florida, internationally respected stroke therapy expert Professor Pamela Duncan suggested that there is an urgent need to make additional strides in stroke rehabilitation research for such reasons, arguing that we still know little about how the characteristics (timing, intensity, or duration) of traditional therapies really work in comparison to others.

She was, and is still, right! This lack of data is also down to the fact that it has been felt over the years to be unethical not to ‘treat’ a large cohort of patients as part of a control group to test dominant therapies. Whilst the experts figure it out and continue to add to the growing body of high quality studies for the evidence base, I suggest that YOU (when you’re ready), start incrementally to make the rules for yourself, as I did.

To help you on your journey, you can use the complete system shown in the Successful Stroke Survivor manual  and there IS a lot of other help around – you just need to know where and how to look. You can be much more informed than I ever was 2o years ago at the time of my own stroke. You have absolutely nothing to lose. Who knows what you can achieve if you have no set boundaries? There’s absolutely no reason why you can’t ‘Do It Yourself’ to a large extent, after you reach some significant functional milestones, avoiding spending thousands of expensive clinical neurophysiotherapy in the process.

Importantly, you can significantly increase your ability to perform activities of daily life from ANY point in time after your injury. I’ll show you how. Not only that, but I can show you what you have to do to keep, and add to, your gains year on year. Make sure to tune in to further posts!

In the news today: A smartphone application uses a facial video to examine 68 facial landmark points; sensors that measure arm movement and orientation; and voice recordings detect speech changes. Information from each test is then sent to a database server for analysis.

The app accurately detected arm weakness in more than two-thirds of the cases.
And preliminary analyses confirmed that it may be able to reliably detect slurred speech, according to the researchers.

Previous research has found that stroke patients who are treated within 90 minutes of their ﬁrst symptoms were almost three times more likely to recover with little or no disability in comparison to those who received treatment more than 90 minutes after symptoms begin.

Have YOU got aphasia? ARNI Stroke Rehab & Recovery can now help! A suitable speech and language therapist (SLT) can be very helpful and we have the three low-cost specialist SLTs (from UCL and from University of Cape Town) who are available to help you now via login at www.strokesolutions.co.uk . If you do have it, the degree of your communication deficit may be having a significant impact on the success of your rehabilitation programme from now on, but the evidence shows that many people conquer aphasia successfully with the help of home-based SLT. Apply now!
#arnistrokecharity #stroke #strokesurvivors #neuroplasticity #aphasia #aphasiatherapy #speechandlanguagetherapy #SpeechAndLanguage
www.arni.uk.com ... See MoreSee Less

ARNI has at last started a Zoom-based speech and language service for the public with specialist SLT colleagues which is already proving to be extremely successful! Keep watching for the next posts and blogs, and go to ARNI WEBSITE if you need help. If you have aphasia, you will find it hard to say what you’re thinking (expressive) or understand the spoken word (receptive). It can also affect your reading and writing skills. Aphasia occurs in as many as 40% of stroke survivors, making it the most common communication disorder caused by stroke, but many people conquer aphasia completely.
#arnistrokecharity #stroke #strokesurvivors #neuroplasticity #aphasia #aphasiatherapy #speechandlanguagetherapy #SpeechAndLanguage
www.arni.uk.com ... See MoreSee Less

ARNI offers an initial telephone consultation to find you the best solution to your individual requirements.
For stroke survivors & families: to discuss the possibilities of receiving rehabilitation and exercise after stroke training from one of the ARNI-trained instructors around the UK.
Therapists & professional exercise instructors: wishing to register on the ARNI Functional Rehabilitation and Exercise Training After Stroke Qualification Course.
Call 0203 053 0111
Phone lines: 9.00am to 5.00pm. Monday-Friday
THERE WILL BE A KNOWLEDGEABLE ARNI RECEPTIONIST TO TAKE YOUR CALL.
IMPORTANT: OUR LINE GETS VERY BUSY, SO IF YOU DON’T GET THROUGH FIRST TIME, PLEASE LEAVE A VERY QUICK MESSAGE ON THE ANSWERPHONE AND SOMEONE WILL RING YOU BACK IMMEDIATELY.
Email: support@arni.uk.com
#arnistrokecharity #stroke #strokesurvivors #neuroplasticity
www.arni.uk.com ... See MoreSee Less

If your rehab has ended and you feel you need more help with your recovery then there are wonderful ARNI instructors who are available now! Call 0203 053 0111 to arrange for an ARNI Instructor to work with you. www.arni.uk.com
#arnistrokecharity #stroke #strokesurvivors #neuroplasticity
www.bbc.co.uk/news/uk-england-bristol-60223905?fbclid=IwAR2ZAx0wN0QUuZUE62qhM9H3OVR5WYMpRsZgvVfV3... ... See MoreSee Less

Consistent stimulation is the best way to rewire your brain. Without consistency doing functional retraining, newer connections in your brain can start to weaken and you might lose some of your hard work. This means that if you try to work on your rehabilitation every day, you will have the best chances of functional gain over the long term. How to develop a customised 'plan' for what you should do? It's actually quite hard to work out, and often trial and error plays a big part. But one thing's for sure, you've GOT to make a start now - and use smart guides - here's one to help you: www.strokesolutions.co.uk/product/successful-stroke-survivor-dvds-full-set-incl-bonus-dvd-trainin...
www.arni.uk.com
#neurorehabilitation #strokeexercise #arnistrokecharity #neurorehab #strokerehab #neuroplasticity #strokesurvivors ... See MoreSee Less

The voice on this video is ARNI director Tom Balchin guiding a stroke survivor through ARNI exercises. Have you tried these? Have they helped you?
#arnistrokecharity #stroke #strokesurvivors #neuroplasticity ... See MoreSee Less

Sensory impairments occur after injuries to the parietal lobe. They can cause a variety of problems, including numbness, tingling, and hypersensitivity.

But thanks to neuroplasticity, you can still retrain your brain to process your senses correctly again!
#arnistrokecharity #stroke #strokesurvivors #neuroplasticity
www.arni.uk.com ... See MoreSee Less