Post-stroke motor recovery suggests the existence of a period of heightened plasticity in which the survivors seem to be more responsive to treatment. This is the so-called ‘critical time-window’ for recovery. In short, a systematic review in 2002 found that on average, recovery reaches a plateau at 15 weeks for patients with severe hemiparesis and at 6.5 weeks for patients with mild hemiparesis.

This is one of the reasons that you may well have already heard from a number of sources that 3 months to 6 months to recover function is your limit, and after that, improvement is probably going to range from very difficult to impossible. The field of neurorehabilitation has generally accepted this time-window in the past and the hypothesis has also justified the general cessation of physical therapy at chronic stages. 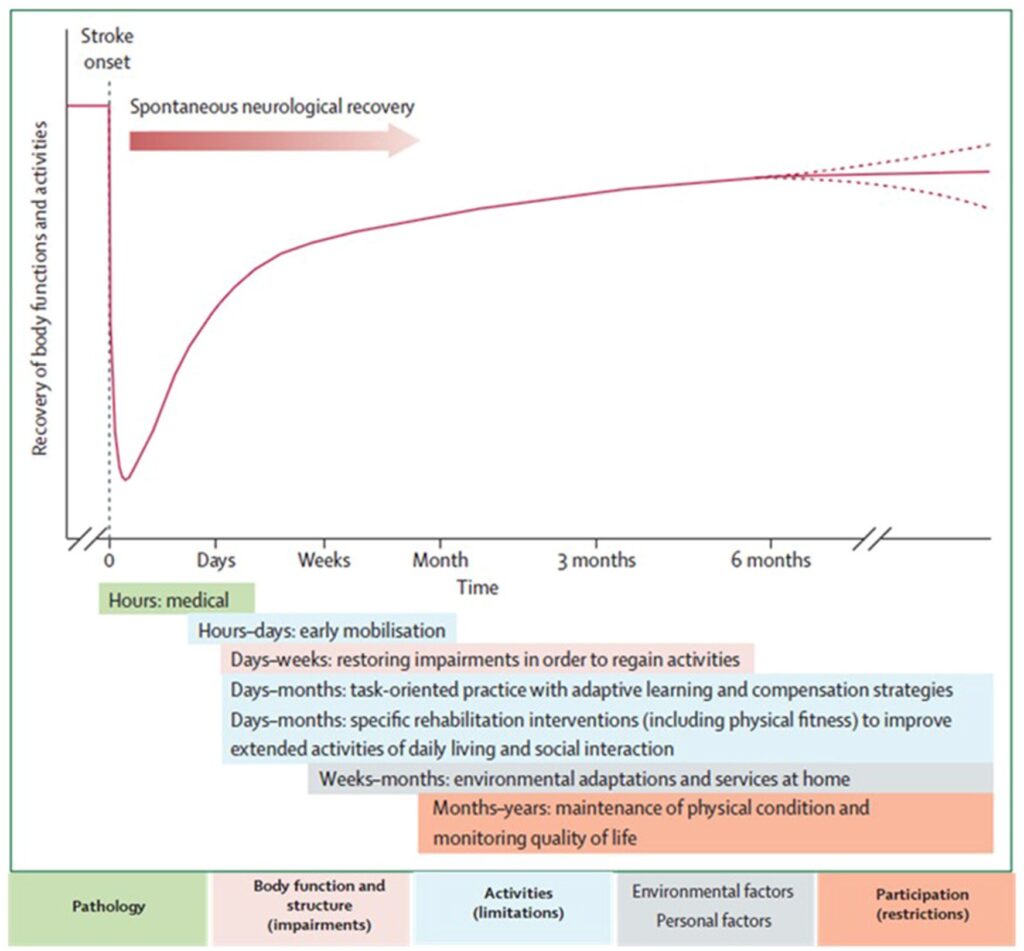 But you must also appreciate that a gradient of significant possible responsiveness to treatment (and also responsiveness to neglect of rehab/retraining) that extends after 12 months post-stroke has been uncovered, which is VERY relevant for the majority of stroke patients.

The chart above, published in the Lancet in 2011 by experts in stroke (Professors Peter Langhorne in the UK, Julie Bernhardt in Australia and Gert Kwakkel in Holland), clearly shows this.

All research professionals in stroke want to locate optimal routes/combinations of interventions & therapies for you to improve. But as it stands right now, the optimal timing for rehabilitation and intensity of treatment remains unclear. Research scientists are currently trying to determine the best time after stroke for intensive motor training and others are investigating the effect of early and intensive therapy on upper extremity motor recovery.

The evidence is starting to show that physical therapy and self-training can have a signiﬁcant impact on body structure and the function of the upper extremity at all periods post-stroke. So, if you can, please try to pay as little attention as you can to anyone making the point that your ‘time window’ has either fully closed or is about to fully close from now on and let’s crack straight on with working very hard (and with know-how of what to do/what not to do) at your recovery. Who knows what will happen? Make efforts – and locate someone to help. Even coaches need a coach. I do! I have a  strength training partner who works in the neurorehabilitation field, who acts in that way for me and has done for around 20 years now.

Even if you’re unlucky and can’t find a therapist or trainer who is able to assist you, it’s about using self-help guides (like Had a Stroke, How What, from which this article is taken) to steer your recovery through the stroke maze. This is the reality. You just need to start. Plasticity will be kicked into high gear when your brain perceives new information as particularly important and when your training is frequently repeated. After a significant period of honest effort of pure ‘rehabby’ efforts, you’ll be transformed both physically and mentally. 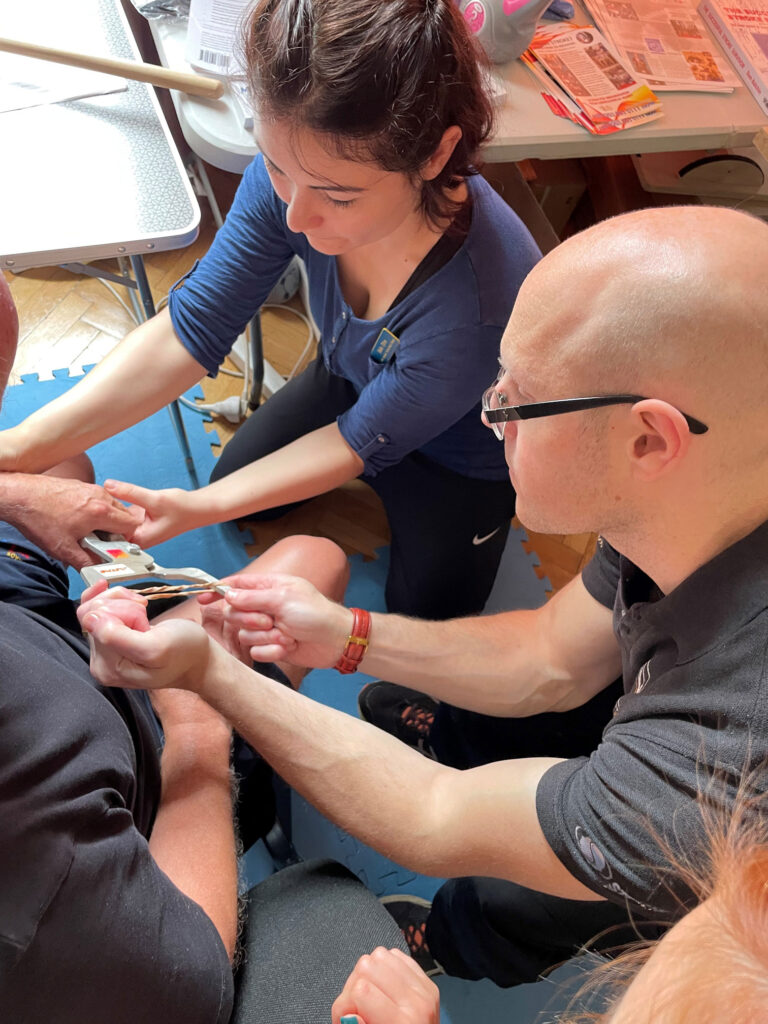 To help with task-training, strength training and developing physical coping (not compensation) strategies, there are also so many adjuncts to community stroke rehab retraining these days – low tech to high tech – from AFO’s that can phase you on from rigid plastic orthotics, to upper limb de-weighting devices, simple and cost-effective devices like the Neurogripper (shown right, and available from ARNI), dynamic orthoses, upper and lower limb robots, virtual reality, FES, EMG biofeedback, telerehab and apps etc and there a number of well-evidenced clinical interventions too to target limitations from stroke, from targeted intensive therapies like CIMT, to pharmacological and even to surgical.

But here’s the thing. The day will come when you’ve found a combination of external adjuncts and retraining elements that works for you. If you haven’t or can’t, PLEASE consult a physiotherapist. And ‘phone up ARNI – we can and we will help to guide you.

I make my view about stroke rehab very clear, which is that if it’s ‘by rote’ and too ‘samey’ and doesn’t challenge you to work on the edges of your ability during your days, then the best way forward, to accompany retraining efforts is to consciously accompany your active recovery efforts with a physio or trainer with an into an actual hobby that is enjoyable and very productive. Or a couple of hobbies with different emphases. If you need to work this through with a health professional or family member or friend, then that’s just great – do is as part of on-going goal-setting/accomplishing…

The best results I’ve seen are when people start to do new hobbies which creatively challenge their own functional limitations. Producing artwork, music making, swimming, cooking, indoor shooting, model railway or Airfix kit constructing and photography are all examples which can be made to be highly rehabilitative if used to directly/knowingly/progressively to tackle motor limitations.

Many more examples of these are revealed in ‘Had a Stroke? Now What?‘, including the combination of ‘hobbies’ that I used to support my very successful upper limb rehabilitation

So, it will be time to get out there and do all sorts of things that are open to you as you seek to create (and get healthy) in the 21st century. And this will open up a whole new tranche of innovative new recovery possibilities. You’ll see. I can promise you that the ‘doing’ of a creative hobby or two which repetitively involves your more-affected limbs is the most efficient way to keep recovery and self-management efforts going over the long term. It’s the ‘no-rehab optimal rehab style’!

« DONATE TO STROKE SURVIVORS AT NO EXTRA COST EACH TIME YOU USE AMAZON! | Coping With & Conquering Emotional Responses After Stroke »