Dr Cherry Kilbride, who has done some pilot studies to examine the efficacy of the ARNI techniques, has asked us to disseminate information about a new trial she and her team are running at Brunel University.

The primary aim of this project is to assess the feasibility (i.e. can it be used), and acceptability (i.e. do people like it) of using an intervention at home for the rehabilitation of the arm after stroke. This research study is funded by Innovate UK and is a partnership between Brunel University London and Neurofenix, a bio-engineeering SME (small & medium sized enterprise).

The current study will recruit 30 stroke survivors who can provide informed consent, who are 18 years old or over, who are at least 12 weeks post stroke, are not receiving rehabilitation for their arm from another provider (i.e. NHS or private therapist) and still have a problem with moving the arm (full inclusion and exclusion criteria provided in the Participant Information Sheet). Key exclusion criteria include pain in the arm at rest, and photosensitivity epilepsy in adulthood. 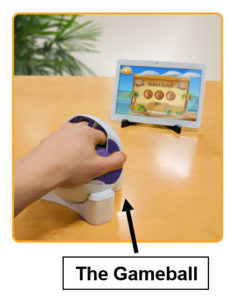 The stroke survivors will use this device: the ‘Gameball’, created by Neurofenix. It is an upper limb rehabilitation device and software for gamification of stroke rehabilitation. Gameball is a portable device that uses either a hand controller or easy to put on arm bands that allow all in one arm training through uniquely designed rehabilitation games displayed on a laptop or tablet. The Gameball has been designed by bio-engineers with the input of stroke survivors and specialist physiotherapists. The Gameball has previously been tested for usability in a university setting and was positively received by all 18 stroke survivors and found to be safe and enjoyable to use

What does the study involve? 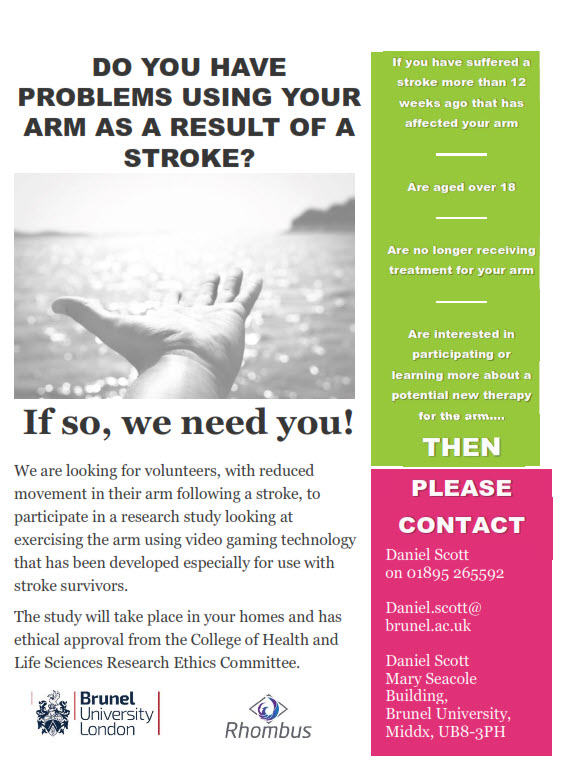 CALLING ALL STROKE SURVIVORS BASED AROUND WEST LONDON:

Why does this study focus on Upper Limb?

Rehabilitation for the arm post stroke is at best scant, as the focus of rehabilitation in the acute phase post stroke is on getting the patient home. Time spent on retraining the upper limb is very low (Lang et al 2009). Effective treatment interventions post stroke are characterised by high intensity and repetitive practice (Langhorne et al 2009). However, changes in infrastructure, resource pressures, an emphasis on mobility during rehabilitation and recent policies advocating earlier discharge home -such as Care Closer to Home- (DoH 2008) have resulted in challenges delivering the amount of rehabilitation necessary to optimise recovery (McHugh et al 2013). In consequence, there is a greater emphasis on stroke survivor’s exercising independently without the presence of a therapist. However, there are issues with delivering this, including problems providing feedback of results and performance,  measuring progress and ensuring compliance with prescribed exercise regimes (Deutsch et al 2007, Holden et al 2007, Durfee at al 2009, Golomb et al 2010, Hendrie 2011). Lack of perceived support and boredom with exercises are the most frequently cited factors associated with poor compliance (Hendrie 2011,Tijou et al 2010).

It has been suggested that the use of virtual reality games and activities could help address issues of boredom and compliance and therefore help provide the high intensity, repetitious practice necessary to drive recovery  (Saposnik et al 2010, Saposnik & Levin 2011, Laver et al 2011). In addition, the provision of visual feedback via an on-screen character (avatar) has been postulated to activate “mirror neurones” (brain cells involved in performing a movement which also “fire” when observing a movement) which has been suggested may aid recovery from stroke (Celnik et al 2006, Francheshini et al 2012).

Try low-cost ARNI Neuroreach, Neurostrong and Neurogripper for size. Click any of the recommended products below. 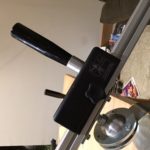 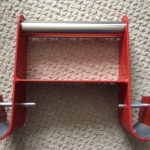 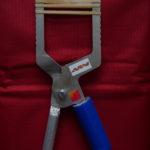 Leave a Reply to denise spencer or Cancel reply