Did you know that Atrial Fibrillation (AF) is a contributing factor in up to 1 in 5 strokes in the UK? 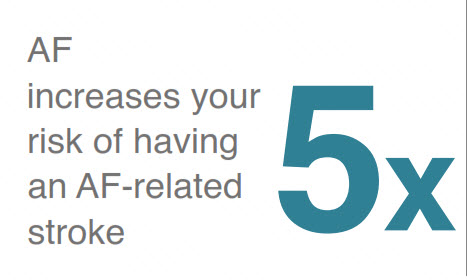 Given that around 1 in 5 women, and around 1 in 6 men will have a stroke in their life, you really need to be aware and checking up on this.

AF might not be bad on its own, but it keeps bad company. Many people tend not to realise that AF is one of the largest risk factors for major strokes, and it can cause congestive heart failure and other cardiac diseases.

AF increases stroke risk by around four to five times because it increases the risk of a blood clot forming inside the heart. If the clot travels to the brain, it can lead to a stroke.

The good news is that with appropriate treatment the risk of stroke can be substantially reduced.

Understanding, recognising and taking proactive measures against AF can potentially save your life. 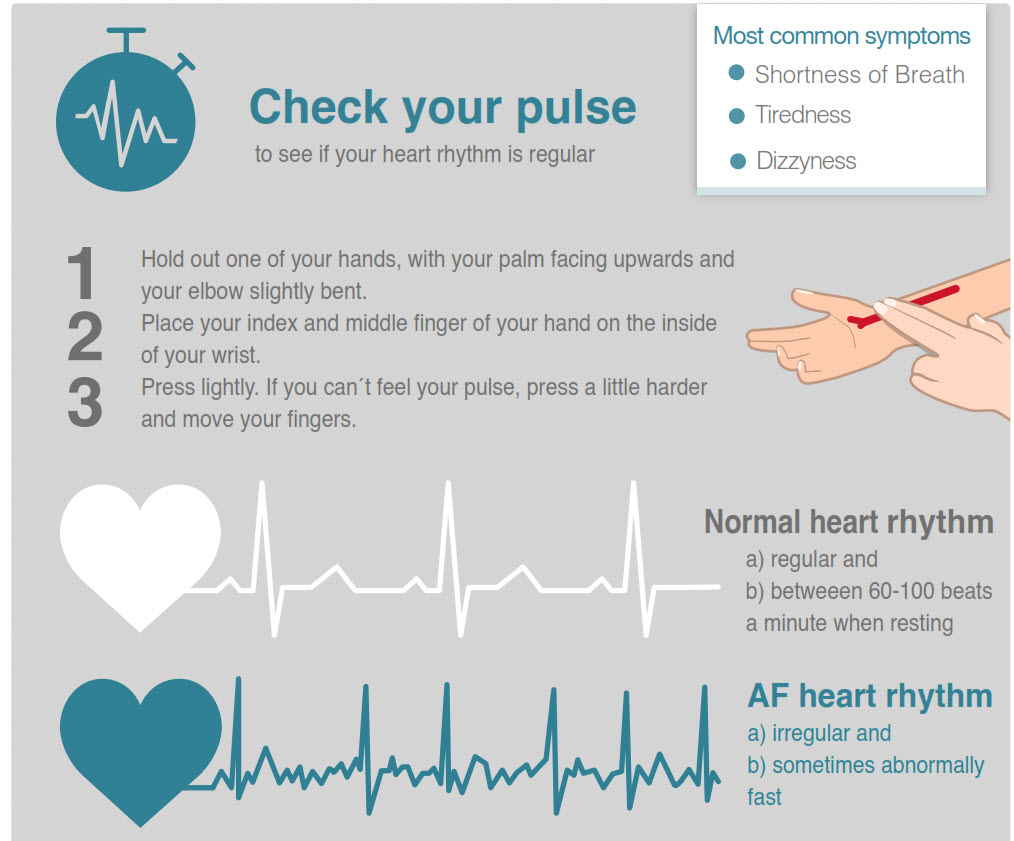 Part of what makes atrial fibrillation so dangerous is that many people with the disease may experience mild, negligible symptoms, or even none at all.

Your heart’s pumping action is controlled by tiny electrical messages produced by a part of the heart called the sinus node (sino-atrial node). The sinus node is sometimes called your heart’s ‘natural pacemaker’. Normally, the electrical messages are sent out regularly, with each message telling your heart to contract and pump blood around your body.

This is felt as a normal, regular heartbeat, or pulse felt at the wrist.

In the case of a very fast or irregular fast-beat, go and see a Doctor ASAP!

IMPORTANT: Diagnosing AF is usually a fairly simple process that includes a Doctor’s exam and an electrocardiogram (EKG). If AF is detected, your doctor may want to do follow-up tests and blood work to ensure there are no other underlying diseases such as high blood pressure.

Atrial fibrillation happens because, as well as the sinus node sending out regular electrical impulses, different places in and around the atria (the upper chambers of the heart) also produce electrical messages, in an uncoordinated way. These multiple, irregular messages make the atria quiver or twitch, which is known as fibrillation. This is felt as an irregular and sometimes fast heartbeat, or pulse.

There is currently no cure for AF and the way it is treated is individualised to the patient’s needs. It may involve medication (both to prevent a stroke and to control the heart rate or rhythm) such as anticoagulant (blood thinning) drugs like warfarin or a newer type of drugs called NOACs., cardioversion (when the heart is given a controlled electric shock with the aim of restoring a normal rhythm) and catheter ablation (this works by scarring or destroying tissue in the heart that triggers the AF). Having a pacemaker fitted to help the heart beat regularly may also be an option for some people.

With grateful thanks to the Heart Rhythm Alliance, in partnership with MyTherapy.

.6 TARGETS YOU NEED TO HAVE AS GOALS AFTER STROKE
Even if you have hired the help of a trainer or a therapist to get you started (advised), you must have input towards your own rehabilitation and the way you want to go. Knowledge is power.
My aim is to show you exactly how to achieve 6 things:

1. Correct balance, co-ordination and posture over time
2. Increase muscular, tendon and ligament strength and fitness over time
3. Decrease spasticity and increase specific functional movement return over time
4. Increase confidence and remove fear of the consequences of exercising
5. Become progressively more self-sufficient
6. Become productive in an occupation and be happy with life

Can you take up the challenge? These can all be achieved by you to a certain degree, however old you are, if you want them badly enough and are prepared to sacrifice some time and effort. Can a generic programme be created? For example, is there one ‘programme’ that will fit everyone? It would be much easier that way, right?

The simple answer is ‘no’. But there are many things that all stroke survivors must do, and many things that most will need to do. You will start with basic tasks that you need to master in order that you can work towards more complex tasks.

Everything you do will rewire your brain: by doing more, you will develop more motor control and gain strength. You will ‘get nothing by doing nothing’.

Please understand that the degree to which brain repair, neural rewiring and neurogenesis happens can be influenced very significantly long after the short therapeutic window after stroke may close.

So, I hope to emphasise to you with this post that the regain of functional movement with control, strength, flexibility, stability and essential physical coping strategies are highly individual, relying as they do on your own genetics, status of accompanying medical problems, attitude (drive, persistence, desire and motivation) and so very many other factors.

The longer you’re a stroke survivor, the more you’ll notice that you can ‘win’ or control (manage) many of these but others will have to be accepted. And, I have to tell you, that re-training efforts can never stop, throughout the rest of your life. Sounds like bad news?! Not so… I’ll show why, in a forthcoming post.

Long term stroke survivors reading this will be nodding to themselves. New stroke survivors will get to understand what I mean (just read my next posts. The good news? ‘Retraining’ can very soon phase into an enjoyable and social physical activity wherein you are actively rehabilitating. So encouragingly, it seems that ‘formal training’ is finite… but it must be done right so you can phase into a maintaining status quo in some areas and regularly improve in others (usually micro-improvements).
#arnistrokecharity #stroke #strokesurvivors #neuroplasticity #strokerehabilitation #neurorehabilitation #strokerehab #neurorehab #strokesurvivorscan
www.arni.uk.com ... See MoreSee Less

Do you know the best way to improve your balance? Practicing balance exercises while standing, along with exercises for lower extremity muscles performed while standing against body weight resistance, is the optimal way to improve balance as well as flexibility, strength and endurance, and fitness. Exercises can include standing up and sitting down, step-ups, heels raises, marching, stair walking, semi-squats, and reaching to the floor sideways and forward to pick up an object. These exercises should be performed with increasing numbers of repetitions and without reliance on the upper limbs for support and balance. Exercises can be made more challenging by increasing the height of steps and chairs and by increasing and varying speed.
#arnistrokecharity #stroke #strokesurvivors #neuroplasticity #strokebalance
www.arni.uk.com ... See MoreSee Less

The evidence base shows that you MUST perform some exercises routinely to help yourself to recover well. But what do you actually do?? in the Successful Stroke Survivor DVDs Dr Tom Balchin shows you the best (most generalisable) strategies from the best-selling manual The Successful Stroke Survivor.
arni.uk.com/product-category/arni-recommended/
#neurorehabilitation #strokeexercise #arnistrokecharity #neurorehab #strokerehab #strokerehabdvd ... See MoreSee Less

Almost all of our day-to-day activities involve balance in some way, and it can be debilitating, embarrassing, and frustrating when someone’s balance is impaired after a stroke. Furthermore, imbalance can lead to falls and, therefore, other accidents and injuries.
Our balance — or imbalance — involves different parts of our bodies to work; eyes, ears, and sensory nerves in muscles and joints all play a role. Each part needs to work together to achieve maximum balance.
According to the data on stroke recovery timelines, many stroke survivors improve their balance after about 6 months with consistent and rigorous training.
What did you do to improve your balance? Please write below and tell us, to pass on tips to others!
#arnistrokecharity #stroke #strokesurvivors #neuroplasticity #strokebalance
www.arni.uk.com ... See MoreSee Less

Could you confidently assess if you or a loved one is at risk of a TIA?

People with cardiovascular risk factors, such as high blood pressure, diabetes, obesity, high cholesterol and smoking, are well known to be at high risk for stroke and TIA. Other conditions that increase risk of a TIA include peripheral artery disease, atrial fibrillation, obstructive sleep apnea and coronary artery disease.

In addition, a person who has had a prior stroke is at high risk for TIA. Stroke symptoms that disappear in under an hour, known as a transient ischemic attack (TIA), need emergency assessment to help prevent a full-blown stroke, according to a new American Heart Association scientific statement published last week in the Association's journal Stroke. The statement offers a standardized approach to evaluating people with suspected TIA, with guidance specifically for hospitals in rural areas that may not have access to advanced imaging or an on-site neurologist.

The statement also includes guidance to help health care professionals tell the difference between a TIA and a "TIA mimic" -- a condition that shares some signs with TIA but is due to other medical conditions such as low blood sugar, a seizure or a migraine. Symptoms of a TIA mimic tend to spread to other parts of the body and build in intensity over time.
#arnistrokecharity #stroke #strokesurvivors #neuroplasticity #neuroplasticity #neurorehabilitation #strokesurvivorscan #strokeexercise #strokesurvivor
www.arni.uk.com ... See MoreSee Less

After being diagnosed with epilepsy last year, Ashleigh prepared her family for in the event of an emergency. She set up educational, role play games with Arthur, teaching him how to call and tell emergency services who he is and where he lives.

She also set up hone numbers so Arthur could not only ring 999 if needed but also so he could quickly call his Dad to update him of any urgent situation.

"It worked! When he found his mum collapsed on the floor at home he was able to call 999 and listened to instructions on the phone from the 999-call handler."

Everything you do towards your own rehabilitation builds up for you a body of knowledge and change which positively affects your own progress. With the right amount of rehab, a person's speech, cognitive, motor and sensory skills can steadily be recovered. Although just 10% of people fully recover from a stroke, 25% have only minor impairments and 40% have moderate impairments that are manageable with some special care. And there's no reason to be one of those people who decline after stroke. Use ARNI Stroke Rehab & Recovery for ideas and go for it!!
www.arni.uk.com
#arnistrokecharity #strokesurvivors #neuroplasticity #neurorehabilitation #strokesurvivorscan #strokerehab #neurorehab #strokeexercise ... See MoreSee Less

Following on from Marie Marie's comment below about approaches to upper limb spasticity after stroke, the evidence shows that standard-of-care treatments such as botulinum toxin injections can temporarily relieve muscle stiffness and pain associated with spasticity, but often at the expense of increased muscle weakness.

Who has tried Botox as an intervention/adjunct to retraining? Did it work for you?

What is post-stroke fatigue anyway? Characteristics may include: overwhelming tiredness and lack of energy to perform daily activities; abnormal need for naps, rest, or extended sleep; more easily tired by daily activities than pre-stroke; unpredictable feelings of fatigue without apparent reason. It's also often under-recognised; so healthcare professionals such as ARNI Stroke Rehab & Recovery instructors should anticipate the possibility of post-stroke fatigue and prepare people who have experienced a stroke and families to mitigate fatigue through assessment, education, and interventions throughout the stroke-recovery continuum [Evidence Level B].
Tom notes: Post-stroke fatigue does not appear to be correlated to the severity of stroke. People who experience very mild stroke may still experience post-stroke fatigue.
#arnistrokecharity #stroke #strokesurvivors #neuroplasticity #strokefatigue
www.arni.uk.com ... See MoreSee Less