On October 13th 2017, the ARNI Institute for Stroke Rehabilitation and the Institute for Sport, Exercise and Health combined forces to run the ‘Recovery after Brain Injury – State of the Art’ Conference at the Royal Society of Medicine. Chaired by Professor Alan Roberts OBE, Professor Hugh Montgomery, Professor Helen Dawes and Dr Tom Balchin, the Formal Welcome was given by the Rt Hon, the Lord Lingfield, DL, Kt., and the Address was given by HRH Princess Katarina of Yugoslavia. The theme was recovery from acquired brain injury: stroke in particular.

Professor of Stroke Medicine at the University of Leicester, Thompson Robinson, noted the many strides forward in acute ischaemic and haemorrhagic stroke treatment over the past 10 years, which has contributed to a reduction in mortality from 25% to 12%. He stated that the most significant factor leading to better survival has been the introduction of specialist stroke units. He warned that with the number of people registered as hypertensive consistently increasing since 2005, that there could be up to another 6.8 million people in the UK with undiagnosed high blood pressure.

Professor of Stroke Medicine at Keele University, Christine Roffe, reported that early treatment with aspirin following the IST study has undoubtedly been a significant factor. Pneumonia, caused by aspiration of saliva and vomit, remains the most common cause of death after stroke, and there is good evidence that early screening for swallowing problems lowers the risk. Maintenance of normal physiological parameters, such as blood pressure, body temperature, oxygen levels, and blood sugar have also been shown to be important for better outcomes.

Professor of Neurological Rehabilitation at the University of Newcastle upon Tyne, Mike Barnes, spoke about the impact of brain injury. He noted that while there is now good evidence of the efficacy of multidisciplinary rehabilitation, the lack of appropriate rehabilitation facilities means that many people have less than adequate rehabilitation and thus do not meet their full potential. Specific rehabilitation problems were outlined, including the management of pressure sores, urinary continence, spasticity and nutrition.

Professor of Clinical Neurology and Neurorehabilitation at UCL, Nick Ward, noted that stroke appears to induce the critical period plasticity that supports recovery. Further, that we should seek evidence of this in humans to justify early and intensive therapy/training. He stated that the evidence shows that the window for plasticity may return to ‘normal’ levels after a few months, but it does not shut. Importantly, drugs (e.g. fluoxetine) are available to increase the potential for plasticity right now, but in order to know who and when to treat, he highlights the need for biomarkers of plasticity mechanisms in humans.

Professor of Cognitive Neuroscience at Oxford University, Heidi Johansen-Berg  confirmed how non-invasive brain imaging techniques can be used to detect systems-level structural and functional plasticity in the human brain. She stressed that although imaging is useful to detect such adaptations, many imaging measures are non-specific and do not allow us to pinpoint the underlying cellular changes that are driving observed effects. She predicted that in the future, imaging could be used to guide individually targeted brain stimulation to enhance adaptive brain plasticity.

Professor of Neurorehabilitation at the University of East Anglia, Val Pomeroy, reported on the creation of a free app called ‘Viatherapy’. This is designed to enhance the ability of clinicians to be current in their use of evidence-based stroke rehabilitation interventions for the upper limb. Through answering a series of questions that the app poses, the therapist is guided to the current best treatment options based on the motor impairment characteristics of each individual after stroke. These options can then be refined by considering other aspects of the individual’s clinical presentation such time after stroke and whether apraxia is present. 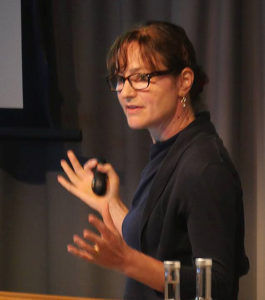 Professor in Cognitive Neuroscience at UCL, Cathy Price, spoke about how people recover the power of speech after stroke. She confirmed that not being able to speak to family and friends is one of the most devastating consequences of stroke. Patients desperately want to know if they will recover but currently, clinicians can’t provide accurate predictions. Cathy and her PLORAS team are predicting recovery based on which parts of the brain have been damaged by the stroke. The results are proving to be much more useful than previous methods. The goal is to improve the quality of life for as many stroke patients as possible.

Consultant in Stroke Medicine at Imperial College Healthcare NHS Trust, Soma Banerjee, informed Conference about a stroke therapy using stem cells extracted from patients’ bone marrow which has shown promising results in the first trial of its kind in humans.  She noted that the study showed that the treatment appears to be safe and that it is feasible to treat patients early when they might be more likely to benefit. She noted that it is currently too early to draw definitive conclusions about the effectiveness of the therapy.

Associate Professor in Psychology Applied to Rehabilitation and Health at Exeter University, Sarah Dean, spoke about the evaluate the clinical effectiveness and cost effectiveness of the ARNI Programme (the ReTrain Trial). ARNI (Action for Rehabilitation from Neurological Injury) Institute Charity was set up in 2001 by Dr Tom Balchin. It provides a community-integration and support network for survivors by matching them with its therapists and instructors. These specialists teach its intensive and creative programme which features innovative techniques such as a rotational technique to get off the floor without assistance, and the use of implement-challenge boards to train the reach, grasp and release components of the upper limb.

Professor of Restorative Neuroscience & Rehabilitation at the University of East London, Duncan Turner, presented the results from some patients who had taken part in the RATULS (Robotic Assisted Training for the Upper Limb after Stroke) Trial so far. He charted the improvement in fine movement control in these patients before and after the intervention and stated that noted that robots, which can carry out 1,000 repetitions an hour, can dramatically augment the therapist’s power to deliver clinically-meaningful input volume.

Key emergent themes from the event were that early intervention, repetitive practice, meaningful tasks and intensity are primary drivers for successful recoveries after stroke. Our grateful thanks to guest speaker Michael Lynagh, and Advances in Clinical Neuroscience and Rehabilitation (ACNR) Editor, Rachael Hansford, who donated a box of the latest issues for delegates.

« Does your therapy end too quickly? | Why should you task-train after stroke? »