So, what’s the point of task-specific practice and why should you do it? Dutch researchers (Kollen, Kwakkel & Lindeman) way back in 2006 reviewed ALL available published clinical stroke rehabilitation trials, of which at the time of writing there existed 735. They selected 151 studies including 123 randomised controlled trials and 28 controlled trials. In their consideration, the rest either did not meet the inclusion criteria or lacked statistical and internal validity, reflecting the poorer methodological quality of many of the clinical intervention studies under consideration. The Dutch researchers concluded in their analysis that traditional treatment approaches induce improvements that are confined to impairment level only and do not generalise to a functional improvement level. In contrast, they concluded that evidence existed that: ‘more recently developed treatment strategies that incorporate compensation strategies with a strong emphasis on functional training, may hold the key to optimal stroke rehabilitation’. 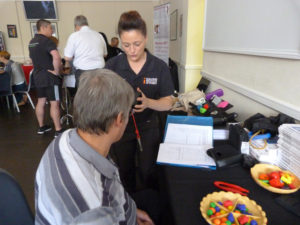 In summing up their findings, they reported that ‘intensity and task-specific exercise therapy are important components of such an approach’. I have found that there is a strong case for implementing and balancing both into an Approach, with the addition of strength training. It’s what I did (and still do) to retrain, manage and ‘negate’ my own physical limitations. And it is how so many others are being taught how to get some significant results in terms of upper limb capacity AND performance (in ADLs).

Although still under investigation for strong evidence of efficacy for stroke rehabilitation, task-specific practice can be said to be one of the best weapons we have to help retrain the brain. It means simply to train the action to be performed in a natural environment. For example, if you wanted to lift a mug and drink from it, you should take a mug and practice lifting and drinking from it, over and over again … and attempt to improve progressively and consistently. The retraining that you are going to do holds this method up as a very BEST paradigm to be following, and one around which lots of other improvement interventions can be introduced/tried, from active orthotics to technology and drugs.

Functional task-practice must not only reinforce recovery milestones, such as sitting balance, standing upright and the ability to walk but also tackle behaviours that are introduced after stroke. You need to be doing the task you want to do. So, for those with significant spasticity in the upper limb, to retrain the ability to open a glasses case to get your specs, for instance… you practise opening up a glasses case.

Get a ‘How-To’ Video. This online DVD about Real-life Upper Limb Self-rehab will show you lots of ways for people who are retraining at home to ‘retrain’ for normal tasks which involve reaching, grasping and releasing.

Task training is critical because it will ‘force’ you to practice using your more-affected limb. This is why the Evidence-Based Review of Stroke Rehabilitation (EBRSR) concludes that constraint induced movement therapy (CIMT) in clinical settings, for those who meet the qualifying criteria, shows strong evidence of benefit in comparison to traditional therapies in the chronic stage of stroke. CIMT is a great example of task training for the upper-limb. 30 to 66 % of stroke survivors report no longer being able to use the affected arm despite trying to rehabilitate and are in danger of avoiding using it (‘learned non-use’ or inattention/ neglect of the limb). Several factors might explain this phenomenon. First, you may see no reason to try and use your bad arm and therefore remain ignorant of underlying motor potential. Second, you may not know how to use any emerging isolated movement for functional performance.

In fact, emerging movement often overlooked: it is considered non-functional. But this is wrong. You actually need to try and regain an increase in active range of motion (AROM) in as many planes and pivots as possible.  Increase in non-functional AROM increases strength and muscle bulk, encourages muscular activity which promotes vascular return, decreases the potential for soft-tissue shortening, and damage with resultant pain and stiffness – and increases osteoblastic activity on the affected and often osteoporetic) side.

What you need to know is that now, eclectic therapists are seeking to fight on two fronts: teaching compensatory strategies for the sake of function and training the affected side to re-establish cortical control over the affected extremities by the ‘original’ neurons. This means that actually, compensatory strategies are not ‘bad’. Rather, they are now being recognised as critical to recovery.

Indeed, as action control is incrementally unmasked on the affected side, emerging movement should be recognised, celebrated, encouraged and built upon. The trick is making sure that compensations & recovery are both worked on, although the work will be separate in the short-term. In the long-term they will meld indistinguishably.

So, try to do MORE with your more-affected upper limb by yourself each day (ie work towards a new goal, and check retention during your ADLs constantly afterwards (because you can lose ability, just like strength (which is shockingly easy to lose). Repeated attempts to use your affected limbs in training creates a form of practice that can potentially lead to further improvement in performance. The ideal is to find oneself in a ‘virtuous circle’, in which spontaneous limb use and motor performance will reinforce each other and re-teach your body to control the position of an affected limb.

In formal retraining situations it is important to advance quickly toward practice of whole tasks with as much of ordinary environment context made available as possible. For example, say, a goal of yours is to improve the action control of your paretic foot for being able to cope whilst walking outside on the pavement, unsupervised and with no supports. The best retraining you can get is to ask a trainer or friend to plan a route for you to go with him or her, so that you can trial it safely and under careful supervision. You can work on leaving your stick and/or supports behind or using/wearing them according to your current levels of ability.

Many stroke survivors can be assisted to retrain by advising them to have one place and a set amount of times per week in which they devote time to their retraining. I tend to promote the importance of setting up a small matted ‘training area’ in your house, which needs only to be a few square metres wide. You also need a chair and a small table with a task-board, more advanced challenge board and other small items on it.

You need to finding your own task specifics, according to your goals. You also need to work on ‘close-simulations’. Even though simulations are probably not as effective for motor learning as performing the actual task, and remember, we are after significant performance improvement via task practice, you can see that this approach gives you some great advantages. It keeps you in the training area, keeps you working on-task and keeps you safe. And then outside of the training area, you need to make an effort to practice the tasks (or the components of them that you can manage), as part of your ADLs, noting changes when you can. 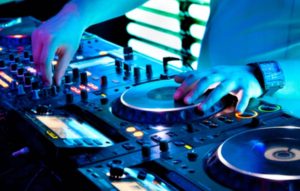 One great example: I created ‘DJ-Therapy’ to get my upper limb working again. I basically made up a hugely successful paradigm which was suitable for me. How I did it is all listed in The Successful Stroke Survivor.

You can read how I started it ‘off-decks’, then used the decks themselves to absolutely superb effect – ‘training’ 5 or so hours per day. It was never ‘training’ per se, for me, however.

Making training ‘not training’ is one of the biggest secrets to getting optimal success with upper limb function. I wish more people would have a go at this idea. Have a think about what might be suitable for YOU to keep YOU practising and interested.